Scrapheap Challenge in the Sunraysia Daily 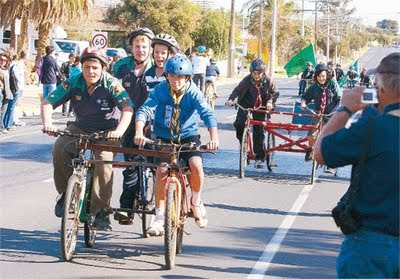 SUNRAYSIA scouts were well prepared for the Tour of the Murray River Scrapheap Challenge yesterday.

The scouts raced their masses of welded and assembled junkyard parts in a fun relay leading up to the Tour of the Murray River’s final stage.

Each scout team of five constructed a bike from scrap parts found at Aroundagain, with the resultant contraptions requiring at least five wheels and brakes.

A first lap was raced with one pedaler, with another joining for each of the five laps until every team member was pedaling the bike.

As well as the Scrapheap Challenge, leading up to the tour’s Mildura stage the Coomealla Cycling Club ran a non-elite bike race, and a fun run/walk was held to raise money for the Cancer Resource Centre.

Eddie Warhurst, Tour of the Murray River steering committee chairman, said the tour had been very successful overall and had a fitting ending in Mildura.

“The Scrapheap Challenge showed it was more than just a bike race and there was a real potential for community based activities,” Mr Warhurst said.

“It certainly captured the imagination of the SBS film crew.